A recent “Wednesday” teaser on Netflix reveals Jenna Ortega as the Addams Family’s daughter. Similar to the actress’ previous content, it’s a dark fantasy project. She already performed in other works of the category quite a lot. However, her CV is highly versatile and includes different genres.

If you’d like to find something to watch with Ortega, we recount her roles below. In addition, we provide other details of the young artist’s life and public activity.

Jenna’s age and her early years September 27, 2002 is the day the actress was born. Jenna Ortega’s family resided in Southern California. Her father is Mexican and her mother is half Mexican, half Puerto Rican. Therefore, Ortega represents the Latin American community. This is a big part of her social activity. Her height is 5’1 (155cm).

Jenna grew up with five other children and, as such, never led a “normal lifestyle”. Her acting career started quite early, so she missed key high school events. In particular, Ortega regrets not visiting graduation and prom. They are considered to be important experiences and milestones in every teenager’s life.

First roles and collaboration with Disney The girl received her first audition at the age of 8. It was achieved thanks to her mother’s and agents’ efforts. In 2012, Jenna debuted in the sitcom Rob. It was followed by a minor role in CSI: NY. The first film where she briefly performed was Iron Man 3. Then, a supporting role came to Jenna Ortega in the movie called Insidious: Chapter 2. It was commercially successful. Both films came out in 2013. The next year, Jenna Ortega shows up in Jane The Virgin which lasted until 2019. In the series, she plays the titular character at a young age. And this recurring role brought the actress her first drops of fame. The show had over 100 episodes, with the girl playing in about 30 of them. Each Jenna Ortega’s movie scene in this drama represented an important flashback of the protagonist. The role became pivotal to the young girl’s career. The telenovela won slews of awards while it was running on the screens. In 2015, the rising star was cast for Richie Rich produced by Netflix. She played gold digger Darcy who squanders Richie’s wealth even against his will. The show was ruined by critics. In the same year, fans could spot Jenna Ortega in a new movie After Words. She portrayed Anna Chapa. Disney’s product Stuck In The Middle was the actress’ next big work. Her character, Harley Diaz, was the lead in the sitcom. It was warmly met by critics, and Ortega got Imagen Award for the role. The comedy series started in 2016 and went on until 2018.

If you wish to see Jenna Ortega in videos, there is one shot for “Chapstick”. The song was written by Jacob Sartorius and released in 2017. The singer also played a role in it. Saving Flora, the movie that came out in 2018, displayed Ortega as the lead character. She starred as Dawn who is the circus owner’s daughter. Jenna gained positive reviews. One of the significant roles that seriously contributed to Jenna’s star status was Ellie Alves. It’s a lead character in the You series’ second season presented by Netflix in 2019. The storyline revolves around a serial killer and his intriguing connection with Ellie’s sister. Jenna plays a smart and curious girl who lives next to the murderer. The character also tends to act older than she actually is. The show gained huge popularity among viewers of the streaming channel. The Babysitter: Killer Queen was another important step in the actress’ career. She appears as a school student who helps the protagonist Cole. This was a horror with elements of comedy released in 2019. Opinions of critics on the product were mixed, however, Jenna became a highlight. In 2021, Netflix aired a family-friendly comedy Yes Day. The plot centers on the parents that indulge in fulfilling every wish of their children. The pandering attitude leads to wacky incidents. Ortega portrays the daughter of the family, Katie. Critics praised her performance, although reviews of the movie, in general, were mixed. If there’s a movie to show Jenna Ortega’s talent at its best, it’s The Fallout. The storyline focuses on two girls who hide in the school bathroom during the shooting. Thus, they create a tragic bond. The film premiered in 2021 and earned enthusiastic reviews. Particularly, Ortega’s performance was lauded. Some critics even admitted the role to be her breakout. The actress has warm feelings towards horror and slasher video products. She revealed it’s highly comfortable for her to play such roles. One of Jenna’s works in this genre is the well-known Scream which came out in 2022. It was a commercial and critical success. In addition, the movie won Ortega the award for Most Frightened Performance. Another horror film on her acting list is Studio 666, presented in 2022. It was led by Foo Fighters and gained critical acclaim. In the same year, the actress performed in more horrors like American Carnage and X. Altogether, that brought her recognition as a “scream queen”. That’s what a few media outlets concluded from her recent roles. One of the highlights for Jenna Ortega in 2022 was her performance in Wednesday. The project develops the story of the Addams Family with Jenna Ortega portraying the daughter. Led by Tim Burton, the TV series focuses on the titular character investigating cryptic murders. Speaking of the location, the girl enters the extraordinary Nevermore Academy with peculiar and monstrous students. She unravels the mystery about her parents while trying to get along with her schoolmates.

The actress got a fringe and dyed her hair black to fit the role. Besides, she adjusted her manners, expressions, and even tone of voice. Jenna Ortega as the Addams Family member seems a perfect choice for the casting team. Combined with her acting talent, the role gained the actress widespread acclaim and overwhelming popularity. Some critics deemed Wednesday Addams by Jenna Ortega the best interpretation of the character yet. 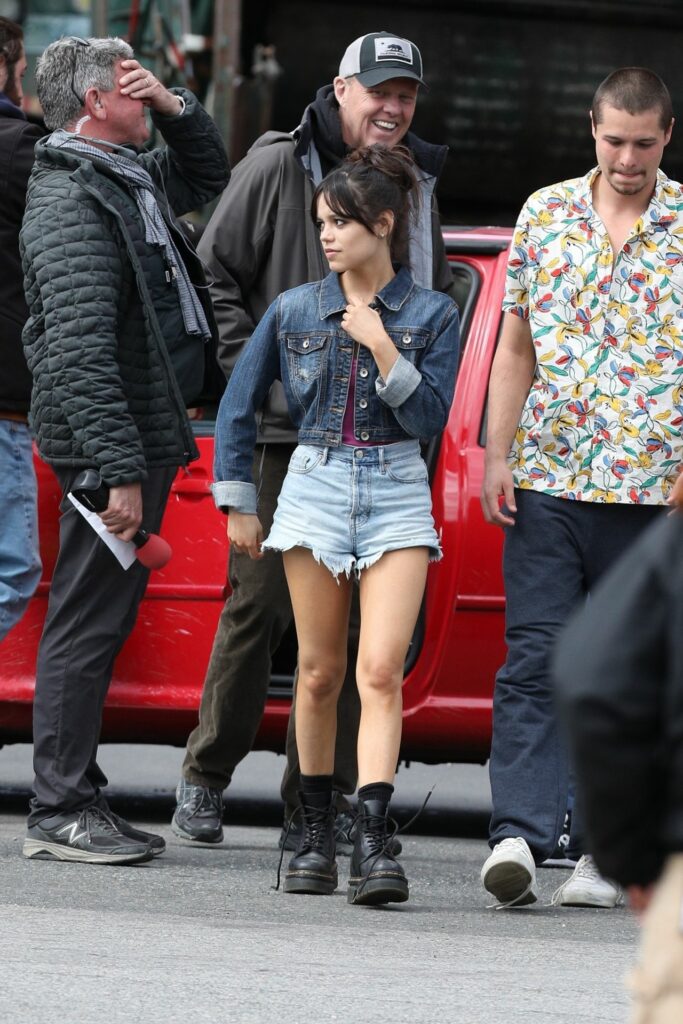 The actress will next perform in the thriller called Finestkind which will arrive on Paramount+. Filming went on from April to May 2022. Also, Ortega will reprise her character in the sixth Scream movie which is still untitled. In September 2022, Jenna was invited to play in Miller’s Girl. She called her character the most complex one she had ever performed. In addition, the whole material gave her an impression of being risky.

Social work and other activities Ortega has been actively using her media platforms to support immigrants. She is also involved in the campaign “Pride Over Prejudice”. It encourages people to accept the LGBT community. The actress has stood up for the organization from the age of 13. Her position negates discrimination and advocates for immigrants.

In 2016, fans had a special meeting with Ortega. It was organized in order to raise money for a girl who had cancer.

During 2019, Jenna participated in a number of benefit concerts to support WE Charity. The movement develops educational and supporting programs for kids in various countries across the world. In 2020, the actress announced she was planning to debut in writing. In January next year, the 18-year-old girl released the book named “It’s All Love”. It contains personal stories from Jenna’s life and various inspirational quotes.

In the same year, Ortega emerged as an ambassador for the brand Neutrogena. In 2021, she partnered with it on “For People with Skin”. It was organized to promote skin care for customers, regardless of their ethnicity, age, or income.

The article aims to answer the question “Who is Jenna Ortega?”. Observing her activity over the years, it becomes obvious she is a hard-working girl. Hopefully, success will remain an intrinsic part of Jenna’s work.

How did Jenna Ortega come to be a celebrity?

She started visiting castings when she was 8. After a number of supporting roles, the girl began to receive lead roles. Her breakthrough happened after performing in Stuck In The Middle which was shown on Disney.

It went on from 2016-2018 with Ortega as the main character in the series. She continued gaining popularity with the following Netflix products. The thriller You and the family comedy Yes Day appeared in 2019 and 2021 respectively.

How old was Jenna Ortega when she became famous?

The girl received her recognition gradually over the years of playing in various video works. She received her first small role at the age of 8.

Jenna’s first lead performance occurred when she was 14. It was a Disney sitcom called Stuck In The Middle.

What is Jenna Ortega’s age?

The actress was born in 2002 in Southern California. On the 27th of September, she celebrated her 20th anniversary. Discovered by agents at the age of 6, she’s built quite a resume by now. The list of works includes lead roles in popular projects by mainstream production companies.

What age was Jenna Ortega when she played in Stuck in the Middle?

This family comedy TV series started broadcasting at the beginning of 2016. At that time, Ortega was 13. New episodes kept coming out on Disney until July 2018 and then the show concluded for good. Thus, the last time Jenna appeared on the screens as Harley she was 15.

Despite her ethnicity, the actress can’t speak fluent Spanish. Although both of her parents are Latin American, they also don’t know the language. Jenna’s ancestors moved to the United States generations before as illegal immigrants. They struggled to learn English and constantly practiced it. So Spanish gradually died down in the family.